A three-star general had his military contract suspended and is now being investigated over a tweet sent to first lady Jill Biden which appeared to mock her and the administration in the wake of the overturning of Roe v. Wade.

Retired Lt. Gen. Gary Volesky is the Army’s former top spokesman, but while in retirement he recently signed a contract with the Army to command the Combined Arms Center and advise active duty officers. He’s being investigated for the below now-deleted tweet: 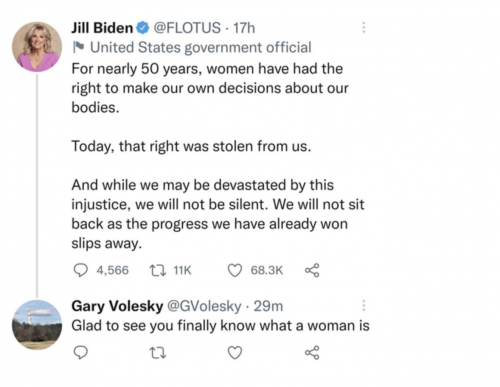 “For nearly 50 years, women have had the right to make our own decisions about our bodies. Today, that right was stolen from us,” Jill Biden’s initial tweet said. Gen. Volesky responded using his personal Twitter account, “Glad to see you finally know what a woman is.”

The tweet was sent on June 24, and Volesky later deleted it without explanation or apology, with USA Today revealing the investigation for the first time Saturday.

“A retired three-star general has been suspended from a $92-an-hour contract consulting the Army and is under investigation after posting a tweet that appeared to mock first lady Jill Biden on a hot-button social issue, according to the Army,” the report said.

Read More: Army General Suspended Over Tweet To Jill Biden: “Glad You Finally Know What A Woman Is” Previous post As I have been saying since March, 2020, and now others agree: Biggest Lie in World History: The Data Base is Flawed. There Never Was A Pandemic. The ‘Covid’ Mandates including the Fake Vaccine are Invalid