The Panorama programme was an hour long, emotion-charged rant that tried to show human-caused climate change was behind a series of recent bad weather events. It featured a man with vascular dementia being helped into a boat from his flooded home. Improbable stories of 6°C rises in temperature were illuminated with a Met Office globe turning deep red. Not a scintilla of scientific proof was supplied to back up most of the improbable claims.

The BBC’s Executive Complaints Unit found that the wording of the introduction, which stated “the death toll is rising around the world and the forecast is that worse is to come”, risked giving the impression the rate of deaths from extreme weather-related events was increasing.

“Risked” is an interesting turn of phrase. The BBC said the wording “was not as clear as it should have been”, and accepted the obvious fact that deaths have actually been falling for many years. 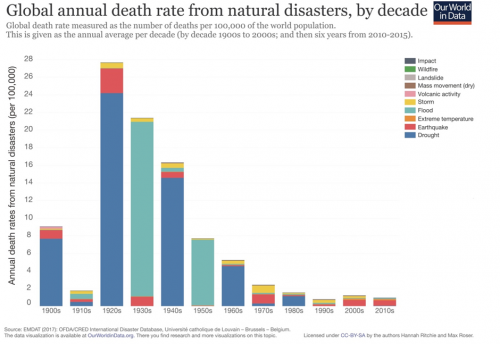 Previous post Spike in Deaths Concurrent With Vaccinations Must Be Investigated by Authorities, Study Says