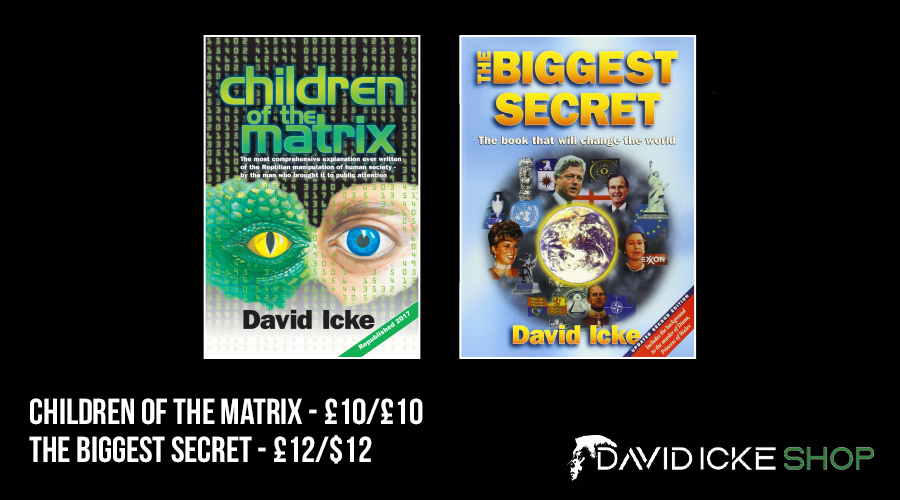 Children of the Matrix and The Biggest Secret are on sale all weekend. Check out shop.davidicke.com now.

Children of the Matrix

David Icke’s most comprehensive explanation ever written of the Reptilian manipulation of human society.

We are born into a world controlled by unseen forces that have plagued and manipulated humanity for thousands of years. No, this is no script from a Hollywood movie. It is happening to you NOW.

You may look around and think that what you see is “real”. But in truth you are living in an illusion. An illusion designed to keep YOU in a mental, emotional, and spiritual prison cell.

David Icke exposes these forces and their methods of human control and he reveals a fantastic web of global manipulation, orchestrated by forces beyond this physical realm. He exposes the hidden bloodlines, through which other-dimensional entities live and operate unseen among us. And he shows how the bloodlines of the royal, political, and economic rulers of today are the same as those who ruled as the kings and queens of ancient times.

David Icke takes the story on from his highly acclaimed “…And the truth shall set you free” and “The Biggest Secret”, and he lifts still further the veil of secrecy that has maintained humanity in manipulated ignorance for so long.

The Truth is not only out there. Much of it is right here.

David Icke’s most powerful and explosive book to date includes the astonishing background to the murder of Princess Diana. Every man, woman and child on the planet is affected by the stunning information that Icke exposes. He reveals in documented, sources detail, how the same interconnecting bloodlines have controlled the planet for thousands of years. How they created all the major religions and suppressed the spiritual and esoteric knowledge that will set humanity free from its mental and emotional prisons.

It includes devestating exposure of the true origins of Christianity and the other major religions and documents the suppressed science which explains why the world is facing a time of incredible chnge and transformation.

David Icke’s The Biggest Secret also exposes the true and astonishing background to the British Royal Family and through enormous research and unique contacts, he reveals how and why Diana, Princess of Wales was murdered in Paris in 1997. This includes information from a close confidance of Diana for nine years which has never before been made public.

The Biggest Secret is a unique book and is quite rightly dubbed “The book that will change the world”. No-one who reads it will ever be the same again. Previous post 158 Why cryptocurrency can never be free from volatility?